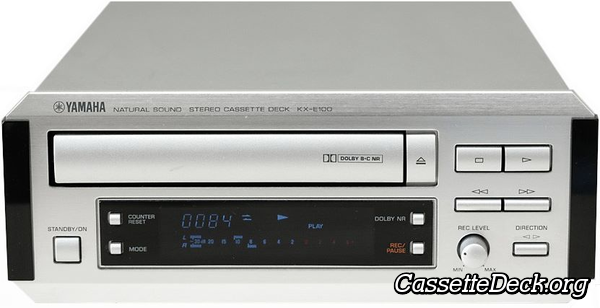 This Yamaha KX-E100 is a stereo cassette deck, it was first sold by Yamaha in 1999 with a manufacturer suggested retail price of USD $200 and discontinued 4 years later in 2003.

1999 Sony introduced AIBO (Artificial Intelligence roBOt), it was discontinued in 2006.
2000 Windows 2000 is released
2001 The first commercial launch of 3G (Third Generation) was in Japan by NTT DoCoMo on the WCDMA standard
2002 Nakamichi went into bankruptcy protection.
2003 Memory Stick PRO, a removable flash memory card format, launched by Sony and SanDisk

Copying product information from this page and use it in your auction or on your website is allowed only if you submit a picture of the Yamaha KX-E100 to us. This picture has to be made by yourself, showing the deck with its entire front and containing no watermarks or logos. In case we discover that you copied Yamaha KX-E100 content without sharing images in return then you give us the right to use the content on the page where you used our Yamaha KX-E100 information.