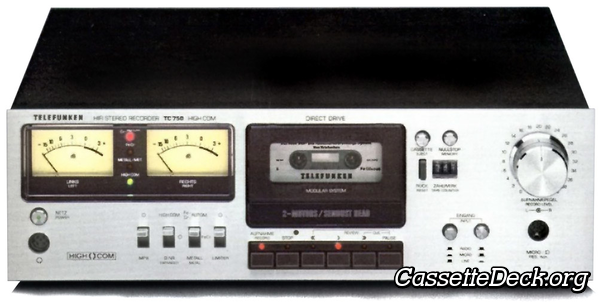 The Telefunken TC 750 is a stereo cassette deck with Dolby B and High-Com noise reduction, it was introduced by Telefunken in 1979 and discontinued 2 years later in 1981.

Typical front loading cassette deck with the cassette compartiment located on the center of the deck. Tape eject is operated mechanically and the cassette needs to be placed with the side to be played facing forward in the cassette well.

Level meters used on the TC 750 are analog needle VU reading meters. Full-logic transport controls used on the TC 750 let it respond to the slightest finger contact for fast and effortless transport function selection. Cue and review can be used to easily and quickly locate the beginning of a passage.

The Dolby-B system reduces tape hiss on tapes recorded on the TC 750 by as much as 10 dB at the highest frequencies. The High Com system (as used in the TC 750) works as a broadband 2:1:2 compander, achieving almost 15 dB of noise reduction for low and up to 20 dB for higher frequencies, while avoiding most of the acoustic problems observed with other high compression broadband companders. To further maintain recording accuracy, the TC 750 incorporates a switchable multiplex filter. When you record FM stereo broadcasts, the MPX filter of the TC 750 can be swiched on to prevent the standard 19kHz FM pilot signal from interfering with the noise reduction system.

1979 The video game "Asteroids" is created.
1980 3M, Mitsubishi, Sony and Studer each introduce a multitrack digital recorder.
1981 The Pacman and Donkey Kong video games are written, and go on to become huge hits

Copying product information from this page and use it in your auction or on your website is allowed only if you submit a picture of the Telefunken TC 750 to us. This picture has to be made by yourself, showing the deck with its entire front and containing no watermarks or logos. In case we discover that you copied Telefunken TC 750 content without sharing images in return then you give us the right to use the content on the page where you used our Telefunken TC 750 information.