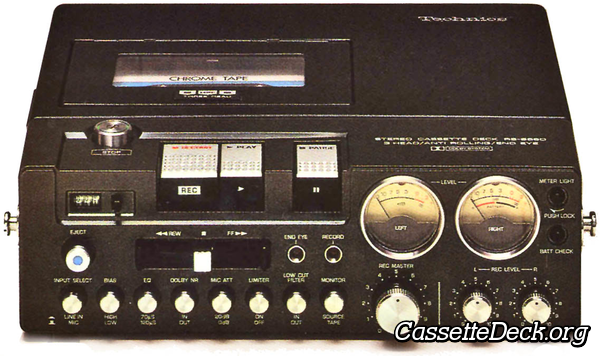 This Technics RS-686D is a stereo cassette deck with Dolby B noise reduction, it was first sold by Technics in 1977 with a manufacturer suggested retail price of USD $650 and discontinued 3 years later in 1980.

The Dolby-B system reduces tape hiss on tapes recorded on the RS-686D by as much as 10 dB at the highest frequencies. A Subsonic filter is provided in the RS-686D to prevent infrasonic signals generated when playing a warped record. These signals can upset the Dolby system and prevening it from functioning properly.

To make live recordings this deck has 2 microphone inputs to connect microphones with a jack connector. For undisturbed listening a mini-jack connector for a pair of stereo headphones is supplied. Connection to other audio components for plaback can be achieved by a RCA cable and recording from a source by a RCA cable.

Copying product information from this page and use it in your auction or on your website is allowed only if you submit a picture of the Technics RS-686D to us. This picture has to be made by yourself, showing the deck with its entire front and containing no watermarks or logos. In case we discover that you copied Technics RS-686D content without sharing images in return then you give us the right to use the content on the page where you used our Technics RS-686D information.