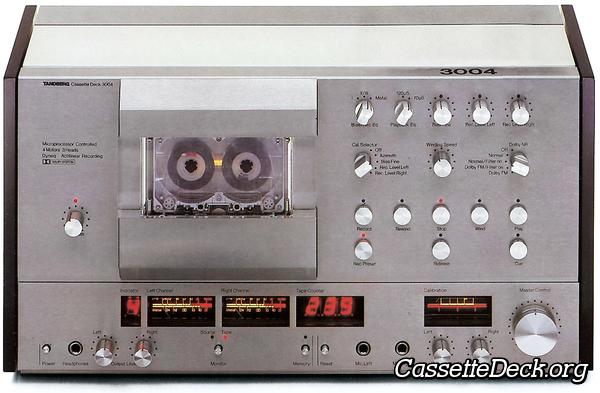 This Tandberg TCD 3004 is a stereo cassette deck with Dolby B noise reduction, it was first sold by Tandberg in 1980 with a recommended retail price of USD $2,395 and discontinued 4 years later in 1984.

Record azimuth correction. To ensure the best response from the wide variety of tapes available adjustment of, sensitivity, to optimum levels can be performed prior to recording.

The Dolby-B system reduces tape hiss on tapes recorded on the TCD 3004 by as much as 10 dB at the highest frequencies. The 19kHz multiplex pilot slgnal present in FM stereo broadcasts can cause false triggering of the noise reduction system. The switchable MPX filter of the TCD 3004 filters out the pilot signal, and assuring proper Dolby processing of FM stereo programs.

1980 3M, Mitsubishi, Sony and Studer each introduce a multitrack digital recorder.
1981 The Pacman and Donkey Kong video games are written, and go on to become huge hits
1982 Sony and Philips announce the CD (Compact Disc) in Tokyo
1983 TV Series The "A-Team" with Mr T premieres on NBC.
1984 The Ferrari Testarossa, a two-door coupé, premiered at the Paris Auto Show.

Copying product information from this page and use it in your auction or on your website is allowed only if you submit a picture of the Tandberg TCD 3004 to us. This picture has to be made by yourself, showing the deck with its entire front and containing no watermarks or logos. In case we discover that you copied Tandberg TCD 3004 content without sharing images in return then you give us the right to use the content on the page where you used our Tandberg TCD 3004 information.