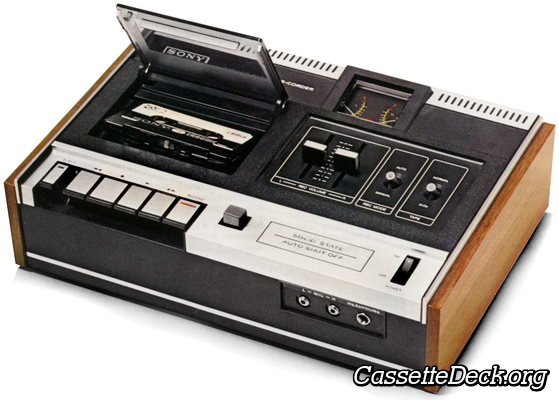 To make live recordings this deck has 2 microphone inputs to connect a microphone with a mini-jack connector. For undisturbed listening a jack connector for a pair of stereo headphones is supplied. Connection to other audio components for plaback can be achieved by a RCA cable and recording from a source by a RCA cable.

1973 Computer graphics are used for the first time in the Motion Picture Industry when the movie "Westworld" is produced.
1974 The Waffle Trainer is introduced, quickly becoming the best-selling training shoe in the U.S.
1975 TDK unveiled its SA (Super Avilyn) line of tapes, the first nonchrome high-bias tape.

Copying product information from this page and use it in your auction or on your website is allowed only if you submit a picture of the Sony TC-121 to us. This picture has to be made by yourself, showing the deck with its entire front and containing no watermarks or logos. In case we discover that you copied Sony TC-121 content without sharing images in return then you give us the right to use the content on the page where you used our Sony TC-121 information.