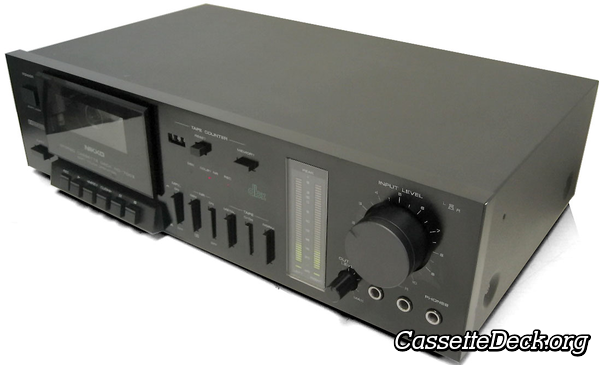 The Nikko ND-700II is a stereo cassette deck with Dolby B and DBX noise reduction, it was introduced by Nikko in 1981 with a list price of USD $300 and discontinued 3 years later in 1984.

The Dolby-B system reduces tape hiss on tapes recorded on the ND-700II by as much as 10 dB at the highest frequencies. Dbx Type II found in the ND-700II is a simplified version of the Type I noise reduction system. The dbx Type II system was designed to be used with systems with limited bandwidth such as cassette based recorders and also uses a simple 2:1:2 compander to reduce noise. To further maintain recording accuracy, the ND-700II incorporates a switchable multiplex filter. When you record FM stereo broadcasts, the MPX filter of the ND-700II can be swiched on to prevent the standard 19kHz FM pilot signal from interfering with the noise reduction system.

Copying product information from this page and use it in your auction or on your website is allowed only if you submit a picture of the Nikko ND-700II to us. This picture has to be made by yourself, showing the deck with its entire front and containing no watermarks or logos. In case we discover that you copied Nikko ND-700II content without sharing images in return then you give us the right to use the content on the page where you used our Nikko ND-700II information.