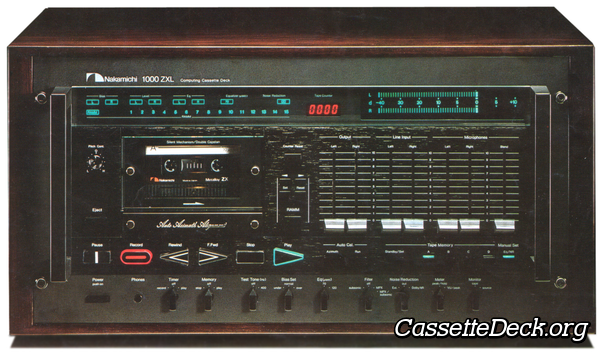 The Nakamichi 1000ZXL is a stereo cassette deck with double Dolby B noise reduction with connectors for optional external DBX, DNL, Adres, Super-d, Dolby-C or High-ComII noise reduction systems, it was introduced by Nakamichi in 1979 with a manufacturer suggested retail price of USD $3,800 and discontinued 5 years later in 1984.

Level meters used on the 1000ZXL are digital FL peak reading meters with peak hold for easy adjustment of optimum recording level. Full-logic transport controls used on the 1000ZXL let it respond to the slightest finger contact for fast and effortless transport function selection. Playback speed may be adjusted with pitch control. Cue and review can be used to easily and quickly locate the beginning of a passage at two speeds.

Record azimuth correction. To ensure the best response from the wide variety of tapes available adjustment of, bias, equalization and sensitivity, to optimum levels can be performed prior to recording.

The Dolby-B system reduces tape hiss on tapes recorded on the 1000ZXL by as much as 10 dB at the highest frequencies. The three-head configuration of the 1000ZXL requires a Double Dolby system, one for recording and one for playback. A Subsonic filter is provided in the 1000ZXL to prevent infrasonic signals generated when playing a warped record. These signals can upset the Dolby system and prevening it from functioning properly. To further maintain recording accuracy, the 1000ZXL incorporates a switchable multiplex filter. When you record FM stereo broadcasts, the MPX filter of the 1000ZXL can be swiched on to prevent the standard 19kHz FM pilot signal from interfering with the noise reduction system.

Copying product information from this page and use it in your auction or on your website is allowed only if you submit a picture of the Nakamichi 1000ZXL to us. This picture has to be made by yourself, showing the deck with its entire front and containing no watermarks or logos. In case we discover that you copied Nakamichi 1000ZXL content without sharing images in return then you give us the right to use the content on the page where you used our Nakamichi 1000ZXL information.