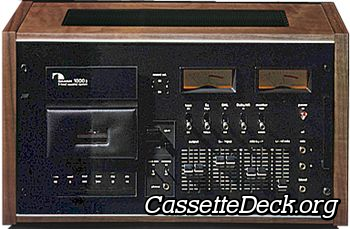 The Nakamichi 1000II is a stereo cassette deck with Dolby B and DNL noise reduction, it was introduced by Nakamichi in 1977 with a recommended retail price of USD $1,650 and discontinued 3 years later in 1980.

Typical front loading cassette deck with the cassette compartiment located on the left side of the deck. Tape eject is operated mechanically and the cassette needs to be placed with the side to be played facing forward in the cassette well which is opened by a damped mechanism.

Record azimuth correction. To ensure the best response from the wide variety of tapes available adjustment of, sensitivity, to optimum levels can be performed prior to recording.

The Dolby-B system reduces tape hiss on tapes recorded on the 1000II by as much as 10 dB at the highest frequencies. Unlike the various Dolby systems, which require encoding and decoding, the Dynamic noise limiter (DNL) used by Nakamichi in the 1000II works on playback only and reduces noise by as much as 10 dB. To further maintain recording accuracy, the 1000II incorporates a switchable multiplex filter. When you record FM stereo broadcasts, the MPX filter of the 1000II can be swiched on to prevent the standard 19kHz FM pilot signal from interfering with the noise reduction system.

To make live recordings this deck has 3 microphone inputs (for left, right and center channels) to connect a microphone with a DIN connector. For undisturbed listening a jack connector for a pair of stereo headphones is supplied. Connection to other audio components for plaback can be achieved by a RCA cable and recording from a source by a RCA cable. All main transport commands can be issued remotely with a wired remote control.

NAKAMICHI 1000 II Part Out - Recorded Calibration And Its P.C.B

Copying product information from this page and use it in your auction or on your website is allowed only if you submit a picture of the Nakamichi 1000II to us. This picture has to be made by yourself, showing the deck with its entire front and containing no watermarks or logos. In case we discover that you copied Nakamichi 1000II content without sharing images in return then you give us the right to use the content on the page where you used our Nakamichi 1000II information.