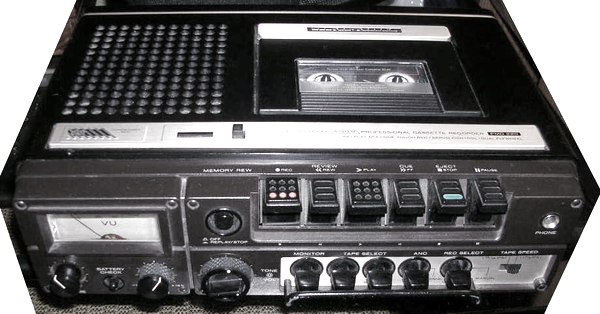 This Marantz PMD220 is a mono cassette deck, it was first sold by Marantz in 1981 with a manufacturer suggested retail price of USD $250 and discontinued 4 years later in 1985.

Level meters used on the PMD220 is a single analog needle VU reading meter. Mechanical transport controls for reliable PMD220 transport function selection. Besides standard recording/playback speed the PMD220 also offers half speed recording and playback, effectively doubling the amount that can be recorded on a tape. Cue and review can be used to easily and quickly locate the beginning of a passage.

1981 Sony introduces the "micro" (3½-inch) floppy disk drive the OA-D30V
1982 Sony launched the CDP-101 in Japan
1983 Apple introduces the Lisa computer, the first commercial personal computer with a graphical user interface (GUI).
1984 The Ferrari Testarossa, a two-door coupé, premiered at the Paris Auto Show.
1985 Sony and Philips produced the standard for Compact Disc Read Only Memory (CD-ROM) computer discs that would use the same laser technology as the audio CD.

Copying product information from this page and use it in your auction or on your website is allowed only if you submit a picture of the Marantz PMD220 to us. This picture has to be made by yourself, showing the deck with its entire front and containing no watermarks or logos. In case we discover that you copied Marantz PMD220 content without sharing images in return then you give us the right to use the content on the page where you used our Marantz PMD220 information.