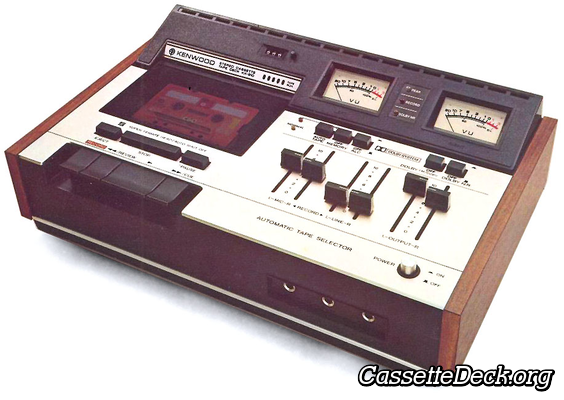 This Kenwood KX-910 is a stereo cassette deck with Dolby B noise reduction, it was first sold by Kenwood in 1974 with a list price of USD $300 and discontinued 2 years later in 1976.

Level meters used on the KX-910 are analog needle VU reading meters with peak indicator for easy adjustment of optimum recording level. Mechanical transport controls for reliable KX-910 transport function selection. Cue and review can be used to easily and quickly locate the beginning of a passage.

The Dolby-B system reduces tape hiss on tapes recorded on the KX-910 by as much as 10 dB at the highest frequencies.

1974 Intel releases the 8080 processor, the 8-bit successor to the original 8008.
1975 Sony launched the Betamax videocassette recording format.
1976 Introduction of Teletext, a European television information that can be seen as a predecessor of the World Wide Web.

Copying product information from this page and use it in your auction or on your website is allowed only if you submit a picture of the Kenwood KX-910 to us. This picture has to be made by yourself, showing the deck with its entire front and containing no watermarks or logos. In case we discover that you copied Kenwood KX-910 content without sharing images in return then you give us the right to use the content on the page where you used our Kenwood KX-910 information.