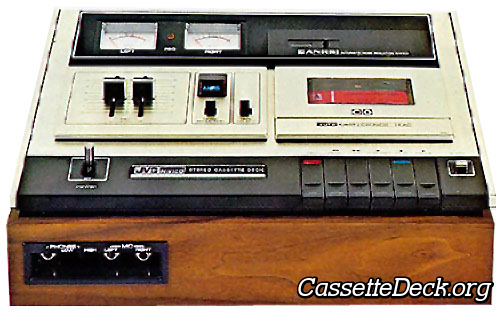 This JVC CD-1667 is a stereo cassette deck with JVC's ANRS noise reduction, it was first sold by JVC in 1972 with a recommended retail price of USD $250 and discontinued 6 years later in 1978.

With ANRS noise reduction used in the CD-1667 the signals of low level are compressed in the recording process and expanded in a complementary way during playback in order to reduce noise without altering the tonal quality of the original sound. In this Automatic Noise-Reduction System's process, the hissing noise inherent in tape recording in the region of 5 kHz, is reduced by approximately 10 dB.

1972 The first video game "Pong" is released by Atari.
1973 Computer graphics are used for the first time in the Motion Picture Industry when the movie "Westworld" is produced.
1974 Intel releases the 8080 processor, the 8-bit successor to the original 8008.
1975 Sony launched the Betamax videocassette recording format.
1976 Commercial Concorde flights by British Airways and Air France began.
1977 Tandy Radio Shack released its version of a personal home computer called the TRS-80.
1978 Technics introduced the famous SL-1200MK2 turntable

Copying product information from this page and use it in your auction or on your website is allowed only if you submit a picture of the JVC CD-1667 to us. This picture has to be made by yourself, showing the deck with its entire front and containing no watermarks or logos. In case we discover that you copied JVC CD-1667 content without sharing images in return then you give us the right to use the content on the page where you used our JVC CD-1667 information.